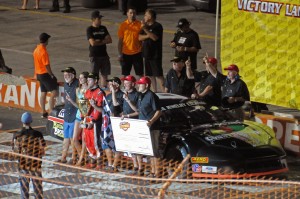 Brandon Setzer, driving the Romeo Guest Construction super late model stock car, broke through to win his first CARS Tour and Super Late Model race at the historic Orange County Speedway in Rougemont, NC this past Saturday night, August 1.  Brandon set a blistering fast time in pole qualifying, taking the top position, and then proceeded to put on a dominant performance, leading every lap of the CARS Tour SLM 125 lap event.   Brandon was forced to fend off several challenges on post caution restarts, but survived the pressure to claim his very first SLM victory.

During the victory lane interview, Brandon stated “Man, I thought we were really good but who could ever have expected this.  I love this track and it’s home for Jim Robbins and Romeo Guest Construction, and I really thank those guys.”

The next scheduled appearance for Brandon and the Romeo Guest Construction SLM race car is Saturday night, August 15, at South Boston Speedway.